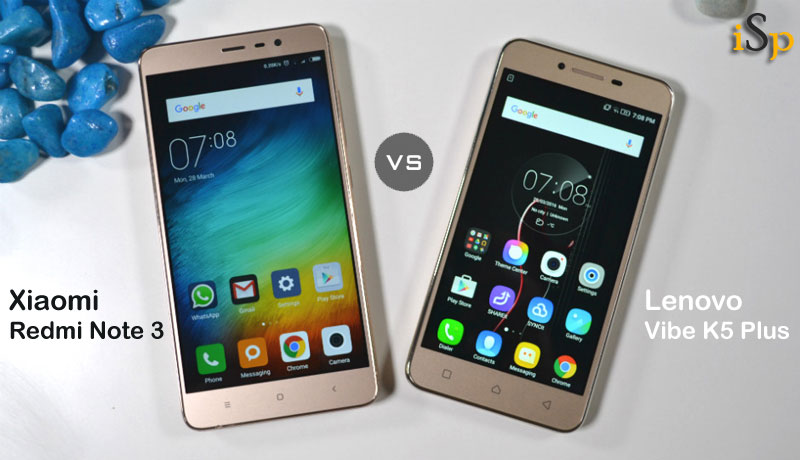 Lenovo, as a Chinese gadgets manufacturer has been making waves in the international markets for smartphones and Tablets with its mid-range and low-priced gadgets. On the other hand, Xiaomi Inc. is another Chinese multinational based in Beijing that has been quite effective in making a foray in the cut-throat world of smartphones.

The Redmi Note 3 has a distinct edge over the Vibe K5 Plus as its display is a tad larger at 5.5 inches. The Lenovo Vibe K5 Plus has a 5-inch display. However, display resolution is identical for both the smartphones at 1920 x 1080 pixels. Although both the phones use full HD display technology, the Redmi Note 3 also boasts of sunlight display, reading mode, and night mode.

These add-on display technologies causes less strain on your eyes as the screen’s lighting automatically adjusts to the ambient light conditions. Read mode and Night mode translate into an improved browsing experience at night time without affecting your eyesight. 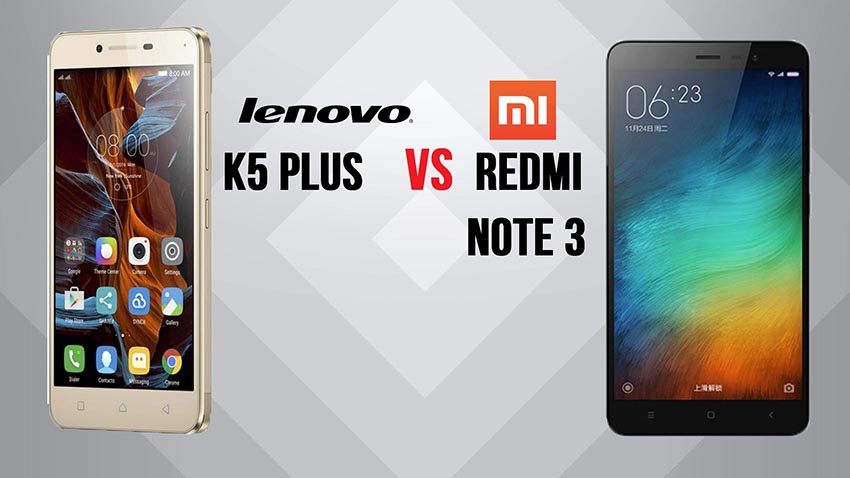 Processors embedded in both Lenovo Vibe K5 Plus and Redmi Note 3 are quite powerful and get a huge boost from the 3 GB and 2 GB RAM respectively. Vibe K5 Plus runs on Qualcomm’s Snapdragon Octa-core 616 processor with 64-bit architecture. Redmi Note 3 takes multitasking to a new high, thanks to its 1.8 GHz Hexa Core Qualcomm Snapdragon 650 processor.

Vibe K5 Plus is supported by an Android 5.1 Lollipop OS that enables you to take advantage of the phone’s features without unnecessarily draining the battery’s charge. Alternatively, Redmi Note 3’s Android 5.1 OS with MIUI7 is ideal for speed customizations at 7 distinct levels.

Both the phones come armed with 16 GB of internal storage that is expandable up to a maximum of 32 GB via a micro-SD card slot.

The Lenovo Vibe 5K Plus has a primary camera of 13 megapixel powered by the 5-piece lens and full HD recording. The camera at the front of 5 megapixel has 4-piece lens with fixed focus feature. On the other hand, the Redmi Note 3 comes implanted with a primary camera of 16 megapixels. This primary camera boasts of versatile features like phase detection autofocus (PDAF) and dual ISP that facilitates the capturing of shots that have a lifelike feel to them.

More from iSpyPrice: The very best Xiaomi phones can be found in our Xiaomi list

Of course, there are a host of other features that come in really handy when you’re leaving for a short trip or vacation. You’re spared from the need of carrying or packing an additional camera while you’re leaving for a holiday. The secondary camera of 5 megapixel is perfect for freezing selfies shots.

Connectivity is simply not an issue with any of the two phones being compared. Both the phones are compatible with 4G broadband technology enabling setup with an array of LTE bandwidths. Other connectivity options are also a given.

The Redmi Note 3’s body has been chiseled out of sandblasted and anodized metal without any coating or paint or additional treatments. The Lenovo Vibe K5 has a chassis made of lightweight aluminum that makes the phone very portable without compromising on durability. The Vibe K5 is lighter than the Redmi Note 3 weighing just 142 grams compared to the latter’s weight of 164 grams.

The battery embedded in Redmi Note 3 is immensely powerful with a capacity of 4050mAh compared to Vibe K5 Plus’s interchangeable battery that has a rating of 2750 mAh.

So, it can be conclusively inferred that the Redmi Note 3’s higher price is largely due to its larger display, more powerful battery, and higher main camera megapixel rating. 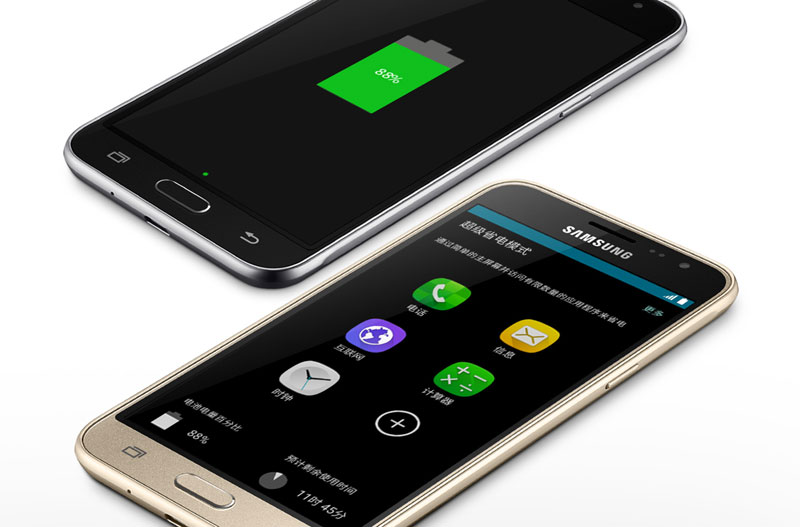 Samsung has introduced an interesting new smartphone in the budget phone segment. The new Samsung Galaxy J3 is here and...