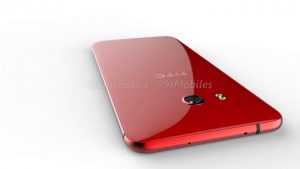 HTC U 11 Smartphone has been seen in various leaks & rumors and now a fresh Render Leak of the HTC Smartphone has surfaced over the Internet. This is the first ever leak which shows the Smartphone from all possible angles thus it has shown almost every detail of the device. The most notable things which leaks show are the “Edge Sensor Feature” and the absence of 3.5 mm Audio Jack. More about the new HTC Smartphone is described in the following text.

Expected Design of HTC U 11 Smartphone :

The biggest highlight of HTC U 11 Smartphone is the “Edge Sensor” feature (allows the user to perform various specific tasks by just “Squeezing” the metallic edges of the Smartphone). The leaks suggest that the Smartphone won’t have 3.5 mm Audio Jack. Vibrant Glossy Red Color Variant of HTC U 11 is shown in the leaked render. The left edge is all clear while the Volume Adjustment Buttons and Power Button are shown on the right edge in the render. The USB Type-C Port, Speaker and In-call Mic & Noise Cancellation Holes are located on the bottom edge of the device. The top edge of device has One Hole for Mic along with one Hole for ejecting the SIM / Micro-SD Card Slot tray. There is Capsule Shaped Home Button is shown in Front along with the Fingerprint Scanner Underneath it. 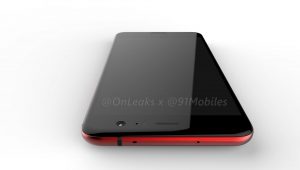 Expected Specifications of HTC U 11 Smartphone :

The Dual SIM Smartphone may run Android Nougat with HTC Sense UI & Edge Sense. The device may feature a 5.5 inch QHD Display Screen with 1440 x 2560 Pixels Resolution and Corning Gorilla Glass 5 Protection. Powered by a Qualcomm Snapdragon 835 SoC, the device may pack 6 GB RAM + 128 GB Internal Storage or 4 GB RAM + 64 GB Internal Storage (expandable up to 2 TB). On the optics front, it may have a 12 Ultra-Pixel Rear Camera and a 16 megapixel Front Camera.

Other features of HTC U 11 Smartphone :

Lenovo launched the Moto Z Play Smartphone last year. The Smartphone packs a 3510 mAh Battery which makes it a...