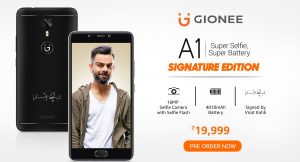 All the Cricket Fans will be glad to know that Gionee has launched a brand new Special Edition of Gionee A1 Smartphone. The Special thing in the device is that it has the Signature of Indian Cricket Team Caption “Virat Kohli”. The device is available for pre-orders via Amazon India and will go on sale from 27 June. More about the device and Gionee Price List is described in the following text.

Specifications of the Gionee A1 Smartphone :

The biggest highlight of the Gionee A1 Smartphone is its massive 4010 mAh Battery. Other notable thing of the Smartphone is the quality of selfies taken by its Front Camera. The device has a 16 megapixel Front Camera (with Fixed Focus, f/2.0 Aperture, 1/3.06 Inch Sensor, 5P Lens and Selfie Flash) and a 13 megapixel Rear Camera. The Dual SIM Smartphone runs Android 7.0 Nougat based Amigo 4.0 OS. It has a 5.5 inch Full HD Display Screen 1080 x 1920 Pixels Resolution. Powered by a 2 GHz Octa Core MediaTek Helio P10 (MT6755) SoC, it has 4 GB RAM and 64 GB Internal Storage. Rear camera of the Gionee A1 endures a 13-megapixel camera (with 1/3.06 Inch Sony IMX258 Sensor and Dual LED Flash).

Price and Offers of the Gionee A1 Smartphone :

The Special “Virat Kohli Signature Edition” Gionee A1 Smartphone is priced at Rs 19,999 in India. The Gionee Smartphone is available for Pre-orders via Amazon India and it will go on sale from 27 June 27 at 12 PM IST. The buyers who pre-order the device will get a free “Sennheiser Headphone”. Amazon is also offering up to Rs 1280 as Amazon Pay Balance as well as there is also an additional discount of Rs 2000 available if someone chooses exchange offer. Vodafone users will get up to 45 GB free data for five months.

Arvind R Vohra (The Country CEO & MD, Gionee India) said that the Special Signature Edition Gionee A1 Smartphone is inspired by the greatness & perfection of Indian Captain Virat Kohli and thus the device is also a masterpiece. The new device with Kohli’s signature is the proof that Gionee is devoted to keep customers happy by offering masterpieces.