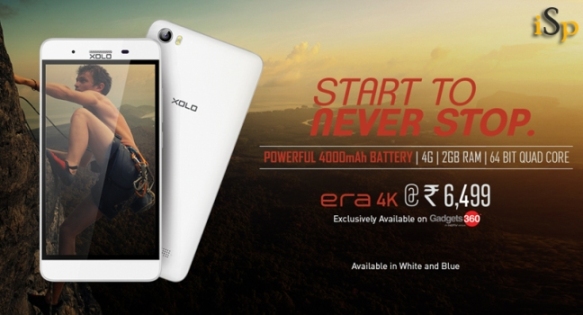 Lava International Ltd which is credited with launching the first smartphone in the world that carried an Intel chip, released yet another budget phone in February 2016, the Xolo Era 4K. You pay a total of Rs. 6,499 for the Xolo Era 4k handset that brags of a UI that exploits state-of-the-art display technology and is supported by a robust processor. This Xolo phone comes equipped with two cameras and is compatible with 4G broadband as well as other cellular technologies with advanced connectivity technologies.

The handset gets a huge boost from its omnipotent battery which obviously is the smartphone’s most noteworthy feature. Apart from that, the Xolo Era 4K doesn’t have any groundbreaking or innovative attribute that has not been offered before.

At the core of Xolo Era 4K is its 5-inch HD screen that exploits full lamination IPS display technology that translates into an unparalleled viewing experience every time you enjoy a movie or browse through photo albums. The UI gets its protection from a Corning Gorilla Glass 3 encasing that buffers the screen against unintentional or accidental bumps, grazes and scratches. Additionally, the ‘native damage resistance’ imparts an extraordinary toughness to the panel. A MediaTek MT6735P CPU that clocks a speed of 1GHz gets a boost up from 2 gigabytes of RAM enabling you to accomplish your tasks with ease and convenience.

The phone is powered by the Android 5.1 OS. An internal storage of 8 GB is of course nothing to write home about but the fact that the capacity can be expanded to 32 GB with a microSD card certainly offers you a lot more archiving room.

More from iSpyPrice: We have the latest Xolo phone price list

Connectivity is standard with the Xolo Era 4K. Compliant with 4G LTE connectivity technology, you have an immersive browsing experience. Supporting all standard connectivity technologies including Wi-Fi, Bluetooth, and micro USB you can share and exchange data with other compatible devices. A-GPS support lets you find your way in a city or town you’re visiting for the first time.

Xolo Era 4K comes endowed with an 8 megapixel primary camera that has features like autofocus and LED flash that will surely appeal to photography buffs. Shutterbugs will also be able to make good use of other built-in features including but not limited to auto flash, gesture capture, face detection, face beautify, smile detection, proximity capture, multi-angle view mode, HDR, and panorama mode. This camera embedded at the back of the phone can be used to record videos at the rate of 30 frames per second.

The front camera of 5 megapixel comes in handy when you need to capture selfies and engage in a personal video-chat. However, it is the battery of Era 4K which takes the cake and can be easily touted as the phone’s USP. It has a capacity of 4,000 mAh and is made up of lithium-polymer cells. The battery offers up to a maximum of 32 hours and 17 hours on 2G and 3G respectively.

More from iSpyPrice: Have you seen the Xolo Black 1x mobile?

Another striking feature that deserves mention is the ‘gesture control’ feature that offers you extensive leeway in operating the handset. The gesture control functionality allows you to mute a call, pause an alarm, and browse through songs, documents, and images just by waving the hand. Alternatively, you’ll just need to type in C for activating the camera, M for playing music, and tap twice for switching on the phone. Finally, the Era 4K is light to handle as it weighs 157 grams and your grip is also firm as it has a bezel thickness of 9.2 mm.

The Xolo Era 4K will cost you just Rs. 6,499 and gives you the benefit of using several standard features that you would expect from a much higher priced smartphone. It is the battery of the Era 4K that adds great punch to the phone and also offers it an unassailable competitive edge over other phones in its genre. 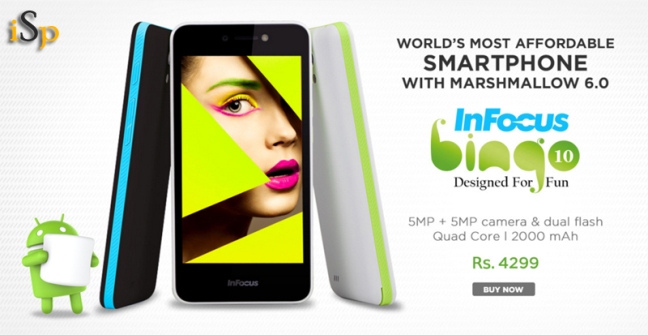 As we had explained in a previous post, US company InFocus Corporation has plans to expand its Bingo series of...