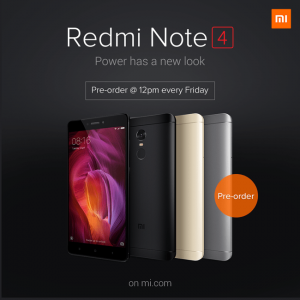 • Pre-Orders of Xiaomi Redmi Note 4 Smartphone have started in India.

The Xiaomi Redmi Note 4 Smartphone’s Pre-Orders are open via Mi.com. Before this Pre-Order announcement, the firm has also announced that Redmi Note 4 Smartphone will be also available via offline stores. Notable thing is that, The Smartphone has already gained 1 Million sales in India thus the firm might have to worry about the availability. The customers who will place a pre-order for the Xiaomi Redmi Note 4 Smartphone must have to pay via Online Payment Options as the firm is not offering the Cash on Deliver option. After ordering the device, it will be shipped within 5 days and customer can cancel the order before the device is shipped. The firm has made a limit of one device per customer in this Pre-Order Scheme. 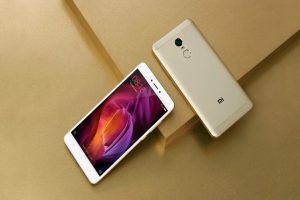 The Xiaomi Smartphone supports Dual SIM and runs Android 6.0 Marshmallow based MIUI 8 Operating System. The Device packs a 5.5 Inch Full HD IPS Display Screen with 2.5D Curved Glass and 1080 x 1920 Pixels Resolution (401 ppi Pixel Density). Powered by a 2 GHZ Octa Core Snapdragon 625 Processor, The Smartphone has 2/3/4 GB RAM and 64 GB Internal Storage (expandable up to 128 GB). On the optics front, it has a 5 megapixel Front Camera (With 850 Wide Angle Lens) and a 13 megapixel Rear Camera (With PDAF). The Xiaomi Redmi Note 4 Smartphone has a 4100 mAh Battery in it. The Smartphone is priced at Rs 9,999 (Starting Price) in India.